Archive for the ‘Ogling the Outfielder’ Category 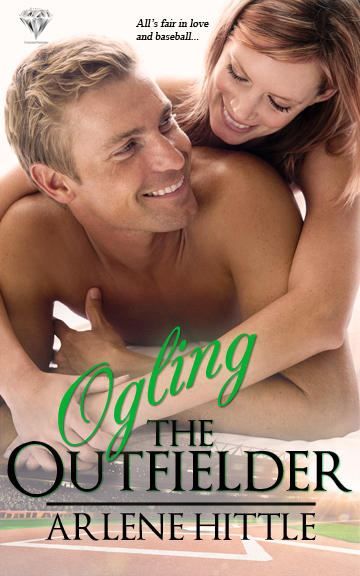 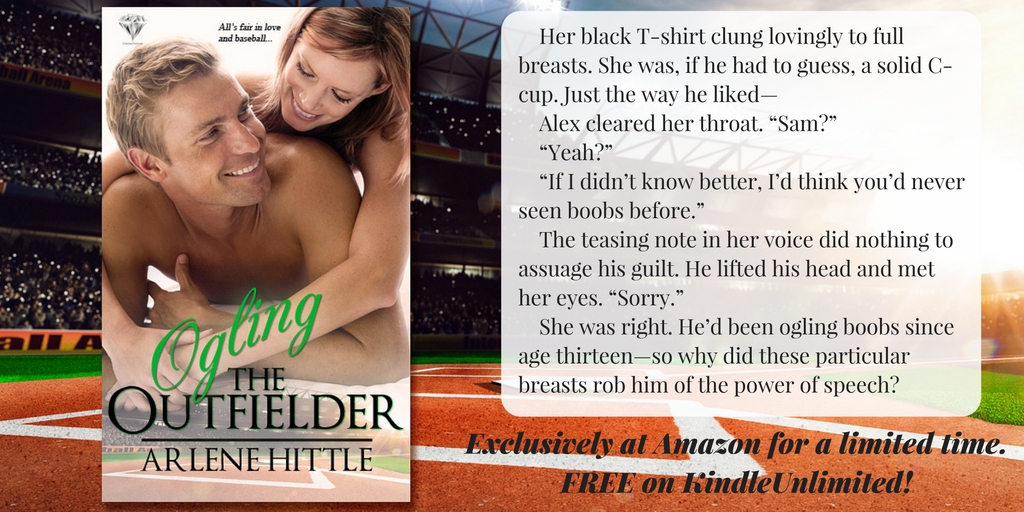 Like #baseball#romance? Get OGLING THE OUTFIELDER #free on #KindleUnlimited 4 a limited time. pic.twitter.com/pnulu27C6O

Starting today through late November, Ogling the Outfielder will be available ONLY on Kindle—and it’s free for subscribers of Kindle Unlimited.

When I started writing the story, the intent was to enroll it in KU as a test. I just hadn’t yet gotten around to it. That is the case no more.

Click the teaser photo to go directly to the book’s Amazon page.

And if you like the sneak peek in the picture, here’s a bit more of that scene. Enjoy!

With his eyes closed, he heard Alex’s sneakers squeaking on the cement before he saw her.

He half-opened one eye. The second quickly followed, giving him a better view. She was…er… “Stunning.”

Alex’s cheeks turned pink, and she dropped her gaze to the floor. “Thanks.”

Crap. Her answer meant he’d said it aloud. One good thing: at least she knew how to take a compliment. Most women he knew brushed them off—or worse, fished for more.

Not that he wouldn’t willingly give them in Alex’s case. Her black T-shirt clung lovingly to full breasts. She was, if he had to guess, a solid C-cup. Just the way he liked—

The teasing note in her voice did nothing to assuage his guilt. He lifted his head and met her eyes. “Sorry.”

She was right. He’d been ogling boobs since age thirteen—so why did these particular breasts rob him of the power of speech?

They were nice, sure. Perfect globes, straining against soft black cotton. But he’d seen, even felt up, some of the finest tits money could buy. This specific intern’s perfectly nice rack shouldn’t leave his mouth dry and his jaw on the floor.

Alex’s arms crossed, thrusting what he couldn’t stop staring at into even more prominence.

He made an effort and dragged his gaze back to her face. “I’ll behave.”

Her lips lifted in a half smile. “Somehow I doubt that.”

“Would you like me better if I were well-behaved?”

Alex’s eyes widened. Her sharp intake of breath said she was as surprised by the question as he was.

“Never mind. Don’t answer that. Why don’t we start this whole conversation over?” He scrubbed his hand over his face as if that could erase the last several minutes. “Ready to grab some food?”

“No?” Damn. So much for starting over.

She shook her head. “That’s not what I meant. Yes, I’m hungry. Starved, as a matter of fact. The peanut butter toast I had for breakfast is long gone.”

She paused and drew a deep breath. “No, I wouldn’t prefer a well-behaved Sam Sloane.” A slow, sexy smile spread across her face, and she laid her hand on his forearm. “You’re perfect the way you are.”

“You think so, huh?” The warmth from her fingertips seeped into his skin. Her fingers tightened around his arm, and he stifled a groan. He was in trouble—and about as far from perfect as he could get. “What about the women in the shower?”

“They were stupid.” Alex’s tongue darted over her lower lip. “Everyone knows it’s not nice to kiss and tell.”

Big trouble. Sam jerked his arm out of her grasp, ignoring the hurt that flashed in her eyes. “We’d better get to the party before all the hot dogs disappear.”

Get Ogling the Outfielder exclusively at Amazon for a limited time.