You already know I spent my vacation procrastinating. This is what I was avoiding doing: 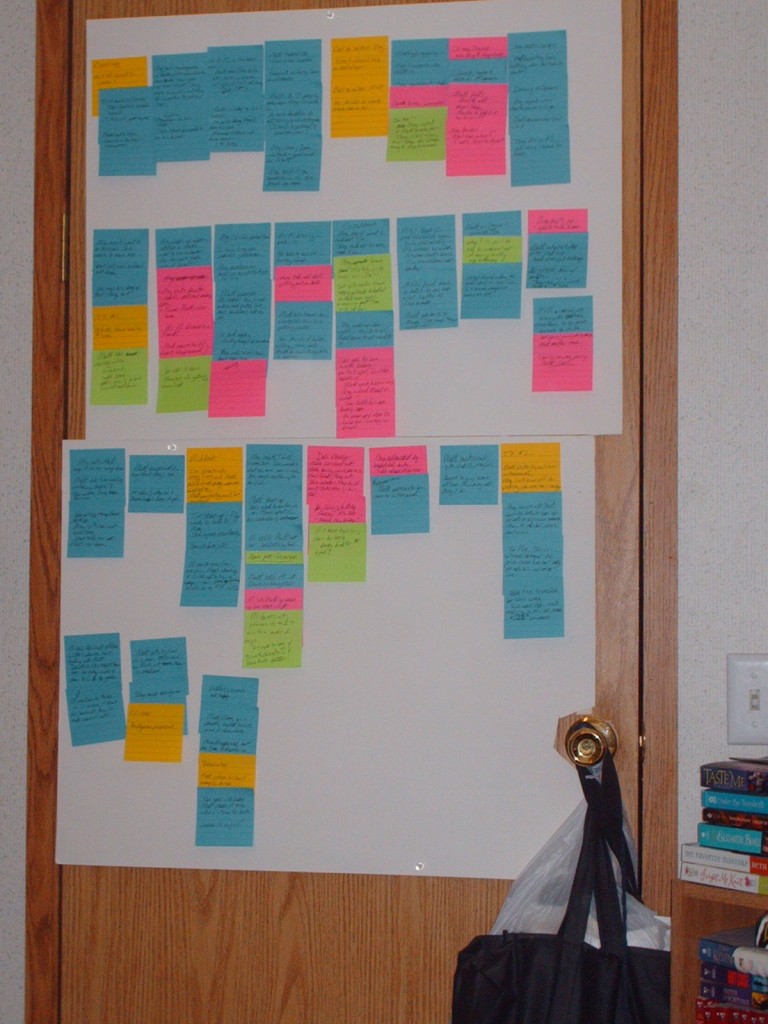 Each one of these colored squares represents a scene in my Golden Heart®-finaling manuscript, “Beauty and the Ballplayer.” The yellow ones are turning points; blue are scenes that can stay the same; pink must be deleted altogether; and green are new scenes that must be written.

I drafted this Post-It plan after sitting down with my friend Mallory, who’d volunteered to read the story and help me “fix” it. (This was after getting a couple of rejections from agents who said the same thing: The writing was good, but they didn’t connect with the characters).

Little did I know she planned to make me re-plot the whole thing!

Well, not really RE-plot since I never plotted it out to begin with. Did I mention I’m the epitome of a pantster? I write scenes in order, but I often don’t realize certain things about my characters (such as Meg’s issue with her controlling father) until I’m well into the last third of the MS.

On the second day of my vacation, Mallory and I sat at Barnes & Noble and came up with the turning points. After that, it was up to me to figure out which scenes would stay and which would go.

I could drown under the weight of all those little colored squares — or so I thought. Now that I’m examining the photo again with a few weeks’ distance, it doesn’t look so bad. There are:

Really, that’s not so much. Dare I say I’m feeling like Superwoman? I can delete long passages with a single keystroke … draft new scenes faster than a speeding bullet …

I have this Wednesday off. Let’s see how much I can get done.

P.S. To avoid serious plot problems with my next story (the companion to “Beauty and the Ballplayer”), I think I’ll be plotting those turning points in advance.

See? The slow learner CAN adapt to new ways of doing things. 😉