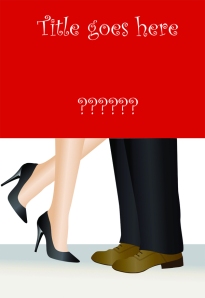 As I was printing out the completed draft of Bree & Mike’s story, I realized something: I HATE the title.

The working title has been “To Catch a Wife” … but that’d be coming totally from Mike’s perspective — and only AFTER he realizes he wants one, about 1/3 of the way into the book.

I could call it “To Catch a Spouse,” since they’re both after one of those (Bree at the start and Mike later on) — but that’s kind of generic. I might just need a completely new title. Maybe “The Virgin and the Playboy’? (Except Mike’s not really a playboy, he just pretends to be one … and Bree doesn’t stay a virgin for long. She and Mike get together in Chapter 3 … or maybe it’s 4. I’d have to check.)

Speaking of titles, I’m not wild about Cassie & Dustin’s, either. (That one’s been dubbed “Daring to Love.”) That’s probably why I continue to call those stories “Bree & Mike” and “Cassie & Dustin.”

Brad and Erin (“Operation Snag Mike Brad”) and Kari and Damien (“Blind Date Bride”) are different. Those titles sprang, fully formed, from the depths of my imagination, and I often use them when referring to their stories.

Ugh. Titles are nearly as bad as queries and synopses. They have to convey so much in so few words — tone, substance — and they have to be interesting enough to jump off the shelf and into readers’ hands (or at least out of the inbox into editor’s hands).

Any tips on coming up with a good one? I’m all ears!

The hits just keep on coming!

That’s right. About 30 minutes ago, I put the finishing touches on the expanded draft of Bree & Mike’s story. It’s 56,000 words (on the shorter side of category romance, but still within the bounds) and will probably grow as I edit.

Of course, with Bree and Mike somewhat settled, I’m back to being at loose ends. What shall I do next?

The task that looms large is synopsis writing … but I think I’ll hold off on that until after our next NARWA meeting on May 15. That’s the topic our guest speaker, Cathy McDavid, will be covering.

Maybe I should go back to editing Kari & Damien’s story, “Blind Date Bride.” It’s my only single-title novel, and my writer friend Pat (who has read both it and Brad & Erin’s story) thinks it’s by far and away the better one.

Since Brad & Erin has been getting agent rejections left and right, I’m starting to think Pat may be right.

Query letter, here I come! Ugh. That sucks nearly as much as a synopsis.

There’s not much to report here. Despite having a wisdom tooth removed Monday, I’ve been keeping up with the writing.

Mainly, I’ve been busy exploring my hero’s reasons for stripping and my heroine’s motivations for wanting to be married by 25. (With one less wisdom tooth — I’m now down to one — I’m having trouble seeing any wisdom in either of their hangups.)

Bree & Mike’s story is now up to about 42,000 words, leaving me to add 13K more to get it to category length. It’ll probably take a couple more read-throughs to get there, but I’ll do it … and then all three of the stories in my “Women of Willow’s Grove” series will be ready for prime time.

I spent some time tonight reading through parts of Bree & Mike’s story, and I’ve come to the conclusion that he might be the best hero in my Women of Willow’s Grove trilogy.

Not surprising, considering he was going to be Erin’s hero (until Brad got in the way). He sprang, fully formed, from the depths of imagination … with a little helpful inspiration in the form of a guy I used to work with.

He’s Greek-god gorgeous (of course!) and he’s not afraid to use his looks to fuel his playboy reputation. He earns extra cash dancing at Willow’s Grove’s only male strip joint, has an aging cat named Augie and isn’t at all the playboy everyone thinks he is.

See? Already he’s more interesting than Brad and Dustin combined … No wonder I haven’t gotten many nibbles on my query for Brad & Erin’s story.

I have other heroes that I like, too. Matt is great and I love Damien best of all. But Mike James will always be my first. And as such, he’ll always have a special place in my heart.

Thanks, GI — wherever you are.