Another My Sexy Saturday

Welcome back to another My Sexy Saturday. I’ve really been having fun with this blog hop, and I hope you are, too.

Last Saturday, I shared a deleted scene from “Diva in the Dugout,” the book I just sold to Turquoise Morning Press. I signed the contract last Thursday. It’s my first sale. I was — and still am — very excited.

But this week, I’m going back to my holiday novella, “Home for the Holidays.” Here, Cher and Derrick just arrived at an Italian restaurant for dinner. This is the evening of the day they met up again at the accident scene.

I normally go the seven paragraph route, but this week I picked just seven sentences. I think they’re good ones. I hope you agree.

When they were seated at DeLuca’s, Cher dove into the basket of garlic bread with the enthusiasm Derrick usually saved for more carnal pursuits. Come to think of it, her moan of pleasure as she licked the butter from her fingers reminded him of a woman enjoying herself in bed. When her eyes rolled back in her head and she moaned again, Derrick squirmed in his chair.

He tried cooling himself off with a sip of water. “You really love that bread, don’t you?”

“Yeah.” She savored another bite before leaning across the table to whisper, “Sometimes, I dream about it.”

“Home for the Holidays,” coming to e-bookstores near you in November 2013.

Doing it without falling on my face

You’ve probably heard the saying “Drummers do it with rhythm” — or some variation thereof. A quick search of Google revealed “Geologists do it in the dirt,” “Writers do it until their hands cramp” T-shirts and other products emblazoned with “Ham radio operators do it with frequency” and “editors do it with style.”

I didn’t go to RWA Nationals last week, but I saw plenty of pictures — and great shoes figured in many of them. Bestselling author Cherry Adair and Fellow Starcatcher (the 2011 Golden Heart class) Kimberly Kincaid are known for fabulous footwear. And just ask any of the Rubies about their shoe collections.

Naturally, when I prepped to have my official author photo taken this week, I had to dig out my own pair.

Gorgeous, right? The Boyfriend sure likes them … even if they make me taller than him.

Problem is, I can’t walk in the darn things.

Consequently, I’ve never bothered to learn how to walk in high heels. I live in sneakers and flats.

It’s not that I don’t love pretty shoes, because I do. I have countless pairs of sandals and boots in my closet, in pretty  much every color of the rainbow.

And I can drool over Manolos with the best shoe horses in the stable … although I doubt I’d ever drop that much cash on anything that didn’t come with an electrical cord. Gadgets are allowed to cost most of a paycheck, not shoes.

On the rare occasions I do wear heels, my ankles wobble like a kid playing dress-up with Grandma’s clothes. Worse, I live in constant fear of falling flat on my face, breaking an ankle and/or exposing my underwear to the world.

Thank goodness none of those misfortunes befell me Tuesday. Maybe that’s because I actually wore flip-flops to our photo spot, then changed into the pumps when it came time to take the pictures. When we traipsed across the parking lot to a different location, on went the flip-flops again.

Now that I’m on the verge of — cough — romance superstardom, I probably ought to start practicing walking in sky-high heels. (Save the cards and letters. I know selling one manuscript does not a superstar make … but a girl can dream.) 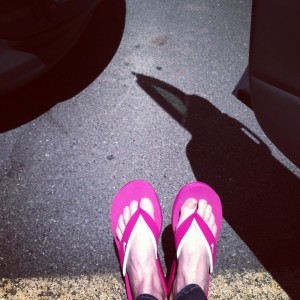 My feet in their natural habitat. High heels need not apply.

Or maybe I can start a new trend. I hear Bedazzled flip-flops are all the rage … somewhere. Out there. At least in the unexplored corners of my mind.

Did anyone get that license plate number? 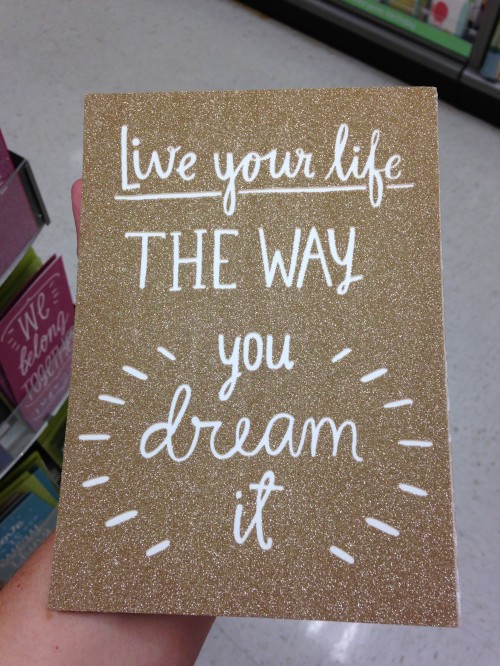 Four days after signing a contract for DIVA IN THE DUGOUT, I’m still riding the high that comes with a first sale. But in the quieter moments (read: when I’m not jumping like a maniac and talking 3,000 miles a minute), I find myself wondering: What just happened here?

Yes, I’ve been working hard — writing new stuff, revising stories that still need help and, perhaps most importantly, opening myself up for rejection by putting my babies out there.

I’d also decided — not so long ago — to take the plunge into indie publishing. I signed up for a self-publishing class online. I hired a web designer and started working with a cover artist. I lined up an editor for HOME FOR THE HOLIDAYS and sent OPERATION SNAG BRAD out to several readers.

Of course, I hadn’t completely given up on a more traditional path. After all, so many folks these days are doing both. Last Monday, I entered Bree and Mike’s story, OVEREXPOSED, in the Golden Pen. The goal was to get feedback to better prep the entry for GH2014. (I wasn’t satisfied with its 2013 scores, even though it landed in the top quarter. I wanted another GH final under my belt.)

But I no longer hung all my hopes on landing an agent/finaling in a contest/selling my book to a publisher. I opted to take my career into my own hands.

Funny how life works, isn’t it? My book deal found me only after I stopped looking for it.

The day after I entered the Golden Pen, I got the email from Turquoise Morning Press; on Thursday, I inked the deal. (I believe that makes me ineligible for the next Golden Heart competition. Correct me if I’m wrong, please. I hate to have wasted an entry fee.)

Did anyone get the license plate number of whatever sent me spinning in a completely different direction?

Is it simply that, as Depeche Mode says, “God has a sick sense of humor”? Or is something else at work?

They — whoever “they” are — say that love finds you when you least expect it. Does the same principle apply to book deals? 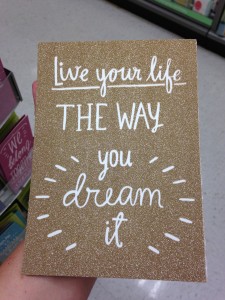 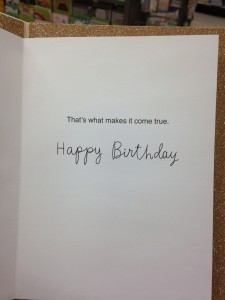 Or maybe there’s something to visualization, to the principle of “acting as if.” That’s what these cards I found at Target the other day seem to suggest.

I also have some personal experience with visualization.

Back in late 2010/early 2011, as part of my ongoing weight-loss journey, I hooked up with a life coach. Among the things Jenn and I did was create a vision of the future me.

After chatting with me about my goals, Jenn emailed me this paragraph for me to consider: 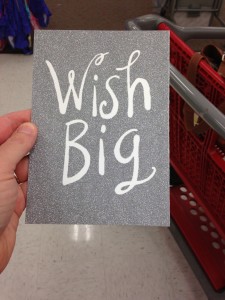 As best I could, I took our vision to heart and acted as if I’d already achieved the success I sought.

The fit, active yoga devotee is still mere pipe dream. Most days, I’d rather veg on the couch … or in a chair at Starbucks. The part about food losing its power over me hasn’t materialized yet, either, though I wish it would.

But the part about writing that I highlighted in purple? Spot-on.

I did become a Golden Heart finalist a few months later (and found out I’d won the Beacon on the very same day). I’ve also gotten not one but TWO new laptops since then. (Okay, the first one was reconditioned … but the current one is all mine. Never-been-owned, fresh out of the box — and I love it, even if I’ll be paying for it for a long, long time.)

While I can’t say for sure how big a role our visualization played in my success, it does make me wonder. Perhaps I should start imagining myself as a fit, active yoga lover who doesn’t let food control her.

It’s worth a shot, right?